Whilst visiting the IndoIdian border town of Lumbini, Rabindra and the team were alighted to the situation of Rani and her whanau. Unfortunately, her children were victims of trafficking. It was only due to the support of a local tuktuk driver, that the team were able to rescue these children from a hotel in India where they were about to become victims of organ trafficking. So thankfully, we were able to successfully return them to their home. Through some work, we immediately began to determine the situation that had led to this terrifying circumstance – The mother had thought she was sending two of her young teenage children Akash and Piya, to India so that they could work, as they desperately needed repairs done to the roof of their home. Rani had lost her job due to covid, so this was her only option. She had only intended for them to be away for as long as it took to raise the funds required.

Rabindra investigated options for this and determined it was not possible to fund a roof repair on the landless settler shack. Due to their home being illegally erected on Govt land (the situation for many people in Nepal), it was already in danger of being demolished by officials.

So Rabindra communicated with whanau that Rani had living in the area who owned their own land. Generously, they agreed to donate a small piece of land on their property, where we had a small whare-house built for Rani. Fortunately, we were able to complete the build just prior to the latest lockdown, to ensure they would be safe and secure.

For today, tomorrow and many days following. We can’t (yet) support huge amounts of people but we can offer huge amounts of change for the better, for those that we do support. By doing this work we are connecting with likeminded and kind people and establishing networks to continue to pay it forward. 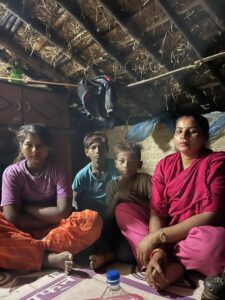 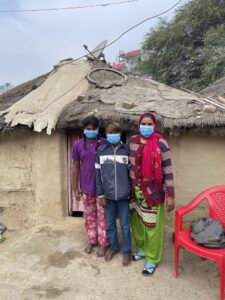 Rani and her whanau at their old home.